South Africa is a unique, diverse, and fascinating country consisting of a range of different cultures, religions, creeds, and peoples. There’s always something new to see and do while in the country, and many people that are born and live in South Africa, there’s simply no other place quite like it.

It’s also a country that’s suffered much strife over the last century, and much of that strife is still ongoing today. And over the years, there have been a lot of misconceptions, myths, and misbeliefs that have popped up, many of which are widely believed, even if they’re horribly untrue.

This myth is born out of the fact that South Africa is, in fact, one of the more dangerous countries in the world, with a high rate of crime. But the misconception comes in when we consider that the majority of the crime in the country is localised.

What that means is that there are certain places in South Africa where the crime is significantly higher than others, and it skews the numbers, making people believe that it’s the entirety of the country that has serious issues with crime. There are some areas within South Africa that are perfectly safe to live, and crime is almost non-existent.

It’s a common belief among foreigners that South Africa is not great to visit for those that don’t speak English, as there are some pretty severe language barriers. This is very much dependent on the location, but in general it’s extremely easy to get around as a large portion of the people living in the country speak perfectly good English. It’s important to remember that there are 11 official languages in South Africa, and there are some areas where it might be quite difficult to find an English speaker, but even then, it doesn’t take that much effort to get around. 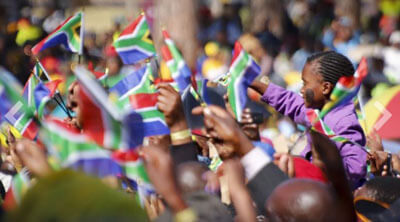 This is a strange myth with obscure origins, but most likely was created due to the many well-known nature reserves that are dotted around the country. The fact is that there are no animals that freely roam around the towns, and that includes lions and elephants. These animals are typically confined to nature reserves like the Kruger National Park, and while it’s not uncommon for some wildlife to be seen crossing highways and roads, they are not making their way around suburban streets.

Another weird misbelief that has somehow made its rounds across the globe. Here, it’s believed that everyone in South Africa lives in small huts or shacks. This myth is born out of the extreme poverty that many in the country have to deal with on a daily basis. But there are also incredibly rich suburbs throughout the country with properties that can be worth tens of millions of Rands, with high speed internet for streaming, gaming, the latest FIFA World Cup odds, and one of the most advanced economies on the African continent.

What To Do In Kwa-Zulu Natal