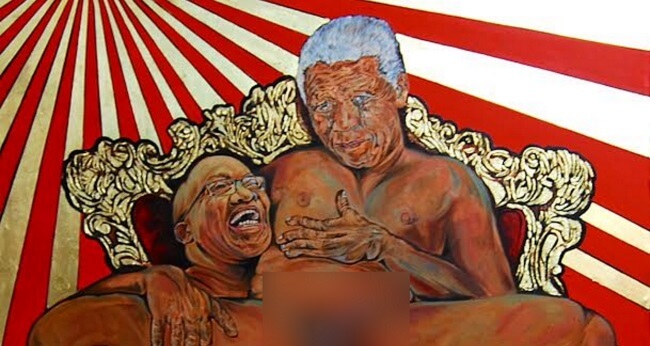 The Art of Controversy in South Africa

There is more to South African art than ancient rock paintings, colourful Ndebele geometry, and watercolours of leopards in the bushveld. The arts were a powerful tool of protest before, during, and after the Apartheid era, and are no stranger to controversy.

The works described below have all been at the centre of storms in the media, in ordinary conversation, and online. The artists who created them did so to start conversations, to fuel debates, and to prompt – or goad – people into questioning leaders, institutions, and the contrasting social realities that affect millions of South Africans.

Those who did not know the name of Brett Murray before May 2012 certainly knew it by June that year. A painting titled the Spear was exhibited at Johannesburg’s Goodman Gallery, and it sparked heated debates.

The painting depicted former president Jacob Zuma standing in a pose borrowed from soviet communist propaganda art, with genitals exposed. According to the artist, it satirised corruption, bad governance, political power, and patriarchy.

Exhibited as part of a solo exhibition in 2010, Ngcono iHlwempu Kunesibhanxa Sesityebi caused outrage. The artist had depicted not only Zuma, but Robert Mugabe, Barack Obama, PW Botha, Nelson Mandela, George W. Bush, and others.

That was just the beginning, because he later painted Zuma, as well as other figures, in various compromising positions. One of the worst offenders being Zuma-Mandela, which the artist claimed depicted the rape of Mandela by Zuma.

Also known as Joe Dog, Anton Kannemeyer co-founded the Bitterkomix comic magazine in 1992. Kannemeyer often draws in the style of Belgian Tintin creator Hergé, and has explained that his art confronts Apartheid-era images and stereotypes of Afrikaners.

It also questions colonialism, race relations, and xenophobia. In 2010, he published Pappa in Afrika, a satire of Tintin in the Congo that examines the ongoing legacy of colonialism in South Africa.

Painted by Yiull Damaso in 2010, the Night Watch! is based on Rembrandt’s Anatomy Lesson of Dr Nicolaes Tulp. It shows deceased child AIDS activist Nkosi Johnson performing an autopsy on Mandela, while Zuma, Tutu, Cyril Ramaphosa, Thabo Mbeki, FW de Klerk, and others look on.

An ANC spokesman said the publication of the then-unfinished painting on the front page of a newspaper was similar to a witch’s curse, because Mandela was alive at the time. In 2018, it sold for R450,000; an amount of money that many would be happy to win at the best Australian betting sites.

Johannesburg-based genderqueer artist Dean Hutton uses mixed media to produce confrontational art, but none had been more controversial than F**k White People. It was installed at Iziko South African National Gallery in 2016.

Part of the Art of Disruptions show curated by the gallery, it featured an old chair, a pair of sneakers painted gold, and posted bearing the slogan. The Cape Party found it so offensive, it laid charges of racism and hate speech, which were dismissed by the court.