While African aesthetics are becoming more prevalent in mainstream spaces, there aren’t many African fashion designers known by mainstream audiences. Even though financial backing is limited, African designers are rising through the ranks and shaping the way we look at African fashion on a global scale. Instead of attempting to replicate Western methods, these emerging African designers are set apart from the masses through the sharing of their truth and are in this way shaping the future of Africa through fashion.

Born in Kimberley, South Africa, Thebe Magugu challenges the restrictions of couture and aims to empower the people who wear his clothing. Magugu was initially inspired to create owing to the women who played an influential role in his life and went on to study at fashion and apparel design at Lisof Fashion School in Johannesburg. Though traditionally a womenswear designer, Magugu’s clothing challenges traditional social constructs of what it means to be masculine or feminine in African culture through the use of gender-blurring experimental designs.

Wekafore, founded by Nigeria born Maniu Jibril, is a unisex clothing brand which represents the spirit of African youth subculture and explores the myth of conformity. Jibril relocated to Dubai after a fire destroyed his home in Lagos in 2007 and his designs take inspiration from both his Nigerian roots and his challenging upbringing in Dubai. While Jibril has faced much adversity, he uses art and design to express himself – much like how many make use of real slots NZ – and founded Wekafore in 2013.

South African designer Laduma Ngxokolo created the MAXHOSA brand in order to incorporate traditional knitwear designs from his native Xhosa culture and aims to reinvent these traditional prints in order to reach a younger audience. Raised in Port Elizabeth, Ngxokolo relocated to Cape Town in order to broaden his access to the fashion industry and while the city’s urban culture has had a large influence on his designs, he still stays true to his origins. 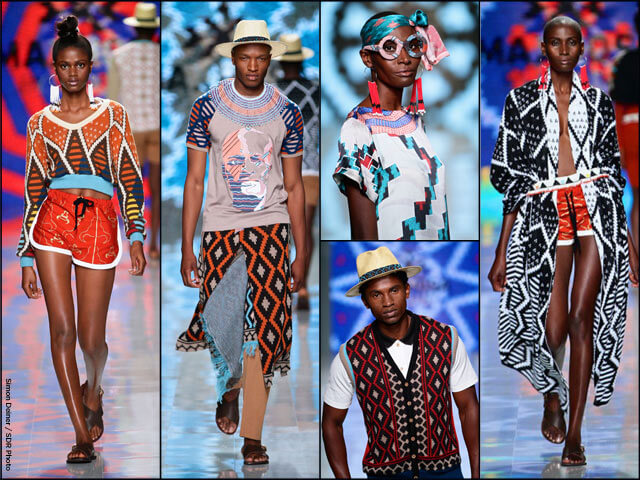 Nigerian designer Bubu Ogisi was inspired to create Iamisigo as she felt that contemporary design was lacking innovation and failing to incorporate minimalist aesthetics in Africa. Through her recent venture from fashion to art and furniture design, Ogisi is dedicated to creating versatile, fashion forward pieces and is known for her use of textured fabrics and bold silhouettes. Based between Nigeria, Ghana, and France, Ogisi is amongst a movement of Nigerian designers who are using their influence to spread awareness of the emerging fashion scene in Lagos.

Though based in Amsterdam, streetwear label Daily Paper was created by Hussein Suleiman, Jefferson Osei and Abderrahmane Trabisi who are of Somali, Ghanian, and Moroccan descent respectively. Through their countries are culturally diverse, the trio of designers incorporate elements from their individual cultures to bring attention to the first generation experience in Amsterdam. Daily Paper was launched in 2010 and has since collaborated with major brands such as Puma and showcased their designs all around the world.