Nothing can beat viewing wildlife in their natural habitat and Africa is home to the most remarkable wildlife viewing in the world. Many of the game reserves in Africa protect the “Big Five” – lion, elephant, buffalo, leopard, and rhino – as well as an incredibly diverse collection of other animals. Whether you’re taking a walking safari, hot air balloon trip, or a game drive, you can be sure to have a life changing and unforgettable experience on the vast plains of Africa.

World-renowned for the Great Migration which takes place from July through October, when thousands of wildebeest, gazelle, and zebra travel between the park and the Serengeti, the Maasai Mara National Reserve should be on the bucket list of any wildlife lover. The Maasai people also live within the park, adding an incredible cultural aspect.

The oldest national park in Tanzania, the Serengeti National Park is a UNESCO World Heritage site and home to the Big Five. The Great Migration which takes place between here and the Maasai Mara National Reserve in Kenya is a sight which needs to be seen to be believed and birders will have the opportunity to view 500+ species. 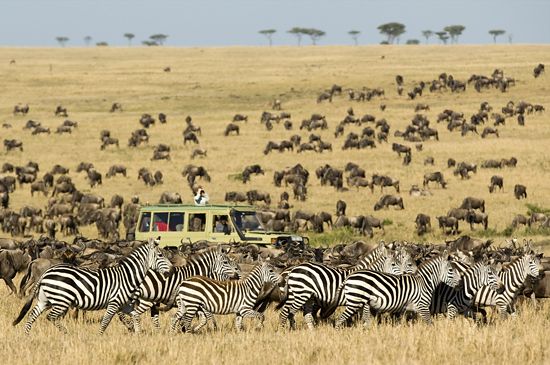 Spanning almost 2 million hectares, the Kruger National Park is the largest and oldest game reserve in South Africa and is home to the Big Five as well as the African wild dog, giraffe, zebra, hippo, cheetah, and 500+ species of birds – certainly a suitable distraction from online blackjack! Offering an incredible assortment of self-catering accommodation, the Kruger is also famed for its self-drive safaris.

Spanning 22,750km², the Etosha National Park is located in Northern Namibia and offers game viewing of the highest order in a vast salt pan. The park is home to 150+ species of mammals including lions, zebras, jackals, springbok, hyenas, cheetahs, and elephants and endangered and rare species such as the oryx, black-faced impala, black rhino, and tsessebe.

The South Luangwa National Park in eastern Zambia is home to one of Africa’s densest populations of wildlife. The park is fed by the continent’s most intact major river system, the Luangwa River, which spans 9,059km² and is home to high numbers of leopard, lion, giraffe, buffalo, elephant, hippo, and crocodiles.

Volcanoes National Park is one of the few places in the world where one can still see mountain gorillas and is the place where Dian Fossey established the Karaoke Research Centre in 1967. The park is also home to the spotted hyena, buffalo, golden monkey, elephant, bushbuck, black-fronted duiker, and 170 species of bird.